Disneyland is my favorite Disney park. There is just something about the history, character, and location; it is so magical. Disneyland was the first Disney park that I visited as a child, but I didn’t return until 2013 when my (now) husband proposed to me in front of Sleeping Beauty Castle. Since then, we have visited a few more times, but I was four months pregnant with Brooklyn the last time we went. We cannot wait to bring Brooklyn to Disneyland one day, but we are waiting until she is a little taller (to ride Radiator Springs Racers) and can handle the time zone change a little better. So, my husband and I decided to book a quick weekend trip, for the two of us, to the Happiest Place on Earth. 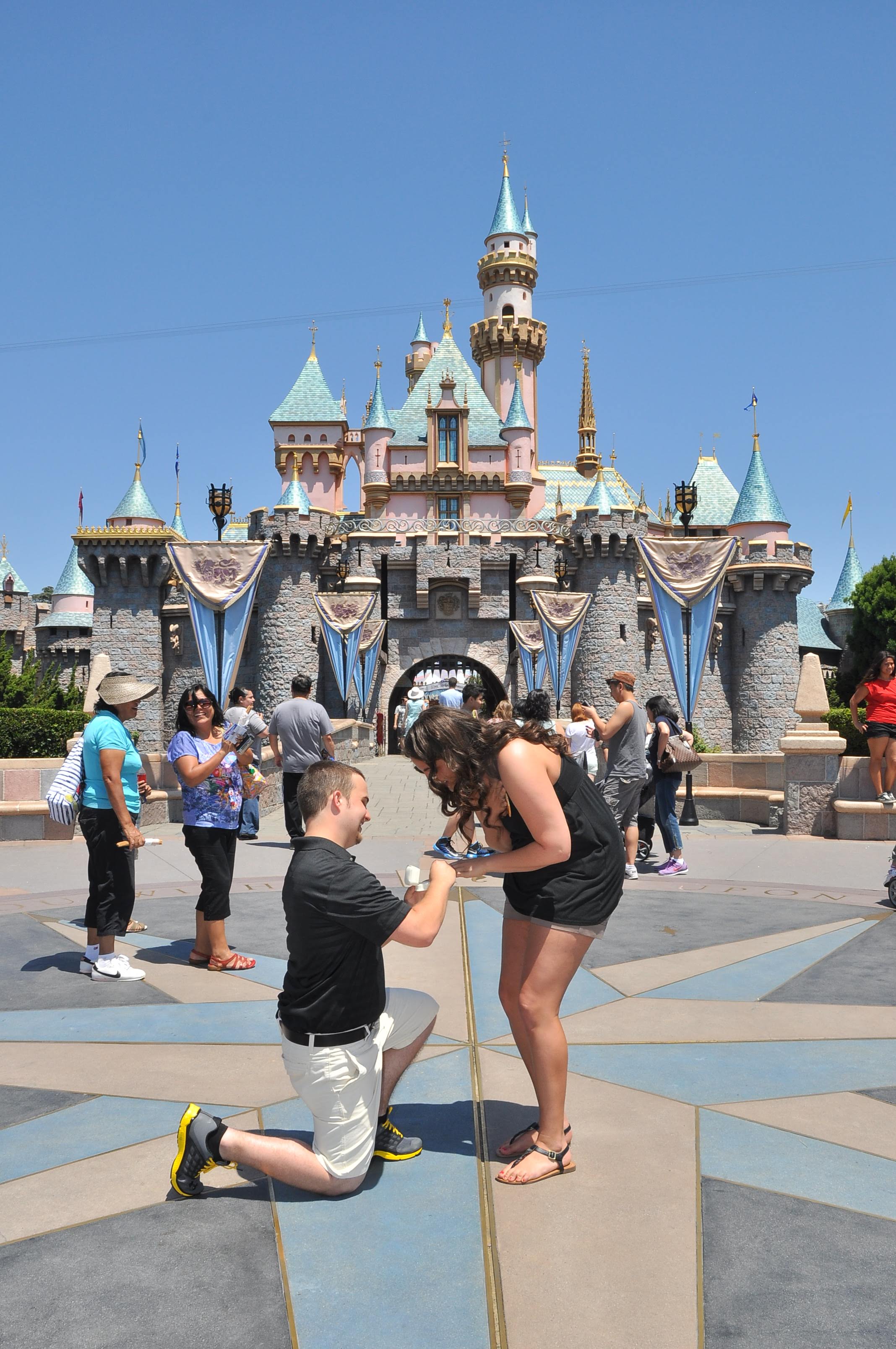 Usually, when we go to Disneyland, we fly into John Wayne Airport in Orange County, California. While LAX always feels so daunting, John Wayne is easy to get in and out of, and you can be at Disneyland in about 15-20 minutes. We decided to spend one day at Universal Studios Hollywood on this trip (you can read about that here), so we flew into LAX. After our day at Universal Studios was over, we took the one-and-a-half-hour (in traffic) drive to Anaheim.

On previous trips, we have stayed at Disney’s Paradise Pier Hotel and The Disneyland Hotel but planned to stay off property at a Good Neighbor Hotel on this trip. That is until Disneyland released some AMAZING discounts for their hotel rooms. We ended up booking Disney’s Grand Californian Hotel at a great price; even the Disney Cast Member I spoke with said they had never seen prices this low. I’ll review our hotel room later, but know it was definitely a bucket-list item to stay there.

After a long day in Los Angeles, we checked into the hotel on Thursday night and decided to grab some quick-service pizza from Napolini in Downtown Disney. The best thing about Grand Californian is that you can literally walk out of the lobby and straight into Downtown Disney or Disney’s California Adventure Park. After eating pizza and salad, we got some incredible ice cream from Salt & Straw. I am so happy that this ice cream shop will be at Disney World soon; it is 100% worth all of the hype. Once we were done with our ice cream, we decided to get some rest so we could get up early for a day at California Adventure. 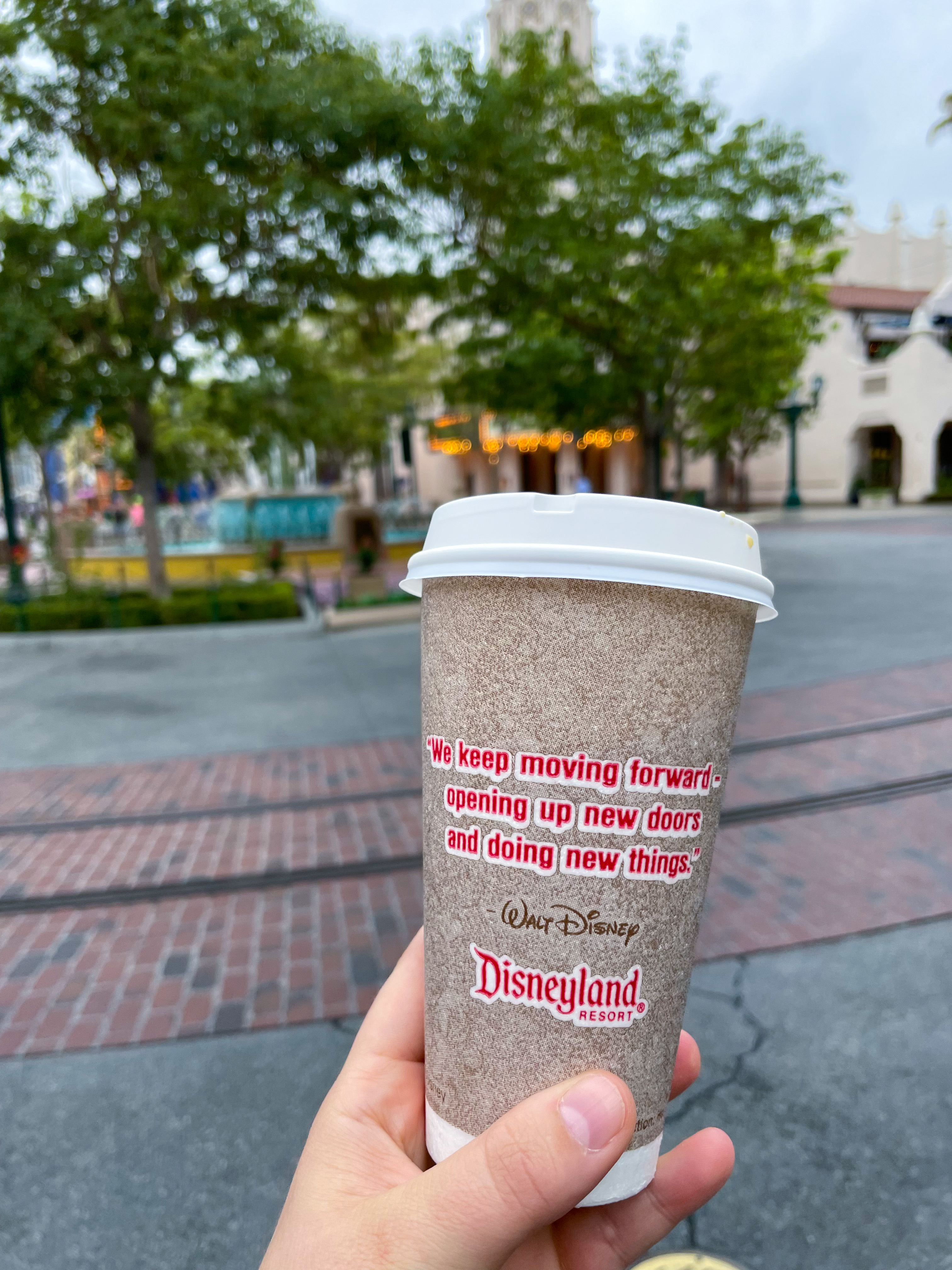 Disney California Adventure just opened a new land called Avengers Campus with a new ride, WED Slingers: A Spiderman Adventure. To ride Web Slingers, you have to check-in at 7:00 am to get a boarding group, so on Friday morning, we woke up and did that. Grand Californian is located basically inside of Disney California Adventure, and when you stay at Grand Californian, you have a private entrance into the park. The park opened at 8:00 am, so we grabbed coffee from GCH Craftsman Grill and skipped down to the park entrance around 7:40 am. They let us in the park, and we walked through California Adventure’s Grizzly Peak and Buena Vista Street while heading to rope drop for Cars Land. Because Fastpass is no longer an option, we decided to hit up Cars Land first and ride Radiator Springs Racers before the line got too long.

At 8:00 am, the Rope Drop Spiel played, the ropes dropped, and we were OFF! We walked swiftly through my favorite of any land at Disney, Cars Land, past Flo’s V8 Cafe to Radiator Springs Racers. Radiator Springs Racers is an auto racing ride inspired by the movie Cars, and it always reminds me of my dad because he loved Cars so much. We were in and out of the ride in about 20 minutes and then decided to check out Disney’s newest land, Avenger’s Campus.

I will be honest, my husband and I are not the biggest Avengers fans. But that’s the fantastic thing about Disney; you don’t have to love or know everything about certain movies to be impressed by the lands they put together. We knew we wanted to try Pym’s Test Kitchen for breakfast, so I mobile ordered our food, and while we waited for that to be ready, we rode Guardian’s of the Galaxy: Mission Breakout. As soon as we were done with that ride, our food was ready, so we grabbed our Ever-expanding Cinna-Pym Toast, Proton PB&J Punch, and coffee and found a table. 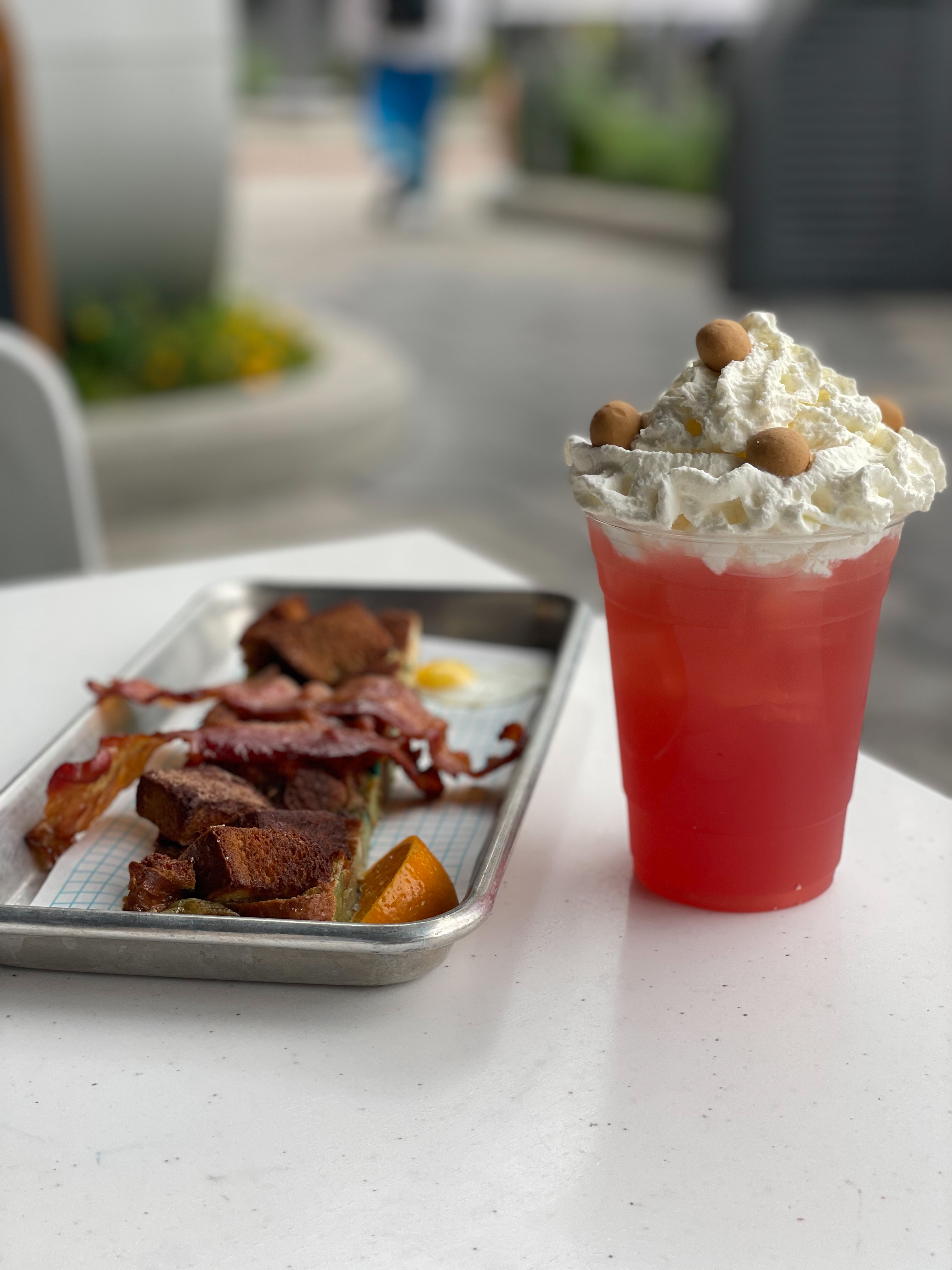 The Ever-expanding Cinna-Pym Toast is “Baked Pym Particle Bread and Egg Custard with Cinnamon-Sugar Topping, a Fried Egg, Smoked Bacon, and Maple Syrup” and was perfect for us to share. We also tried the Proton PB&J Punch, which is “Minute Maid® Lemonade with Peanut Butter and Strawberry flavors, PB-infused Whipped Cream and PB Pretzel Spheres.” This drink was REALLY sweet, and we only had a couple of sips each, but it was perfect for a picture, haha. Overall, Pym’s Test Kitchen is a cute restaurant and the ideal place to have breakfast in California Adventure.

I mentioned before that the last time I was at Disney, I was pregnant and could not ride any thrilling rides. At the time, Paradise Pier at DCA was being changed to Pixar Pier, and I was so sad that I couldn’t ride Incredicoaster. So, probably not the best idea, but after breakfast, we headed to Pixar Pier to try Incredicoaster (it is such a good roller coaster!). We hung around Pixar Pier for a bit and rode Silly Symphony Swings before heading to our lunch reservation at Lamplight Lounge. 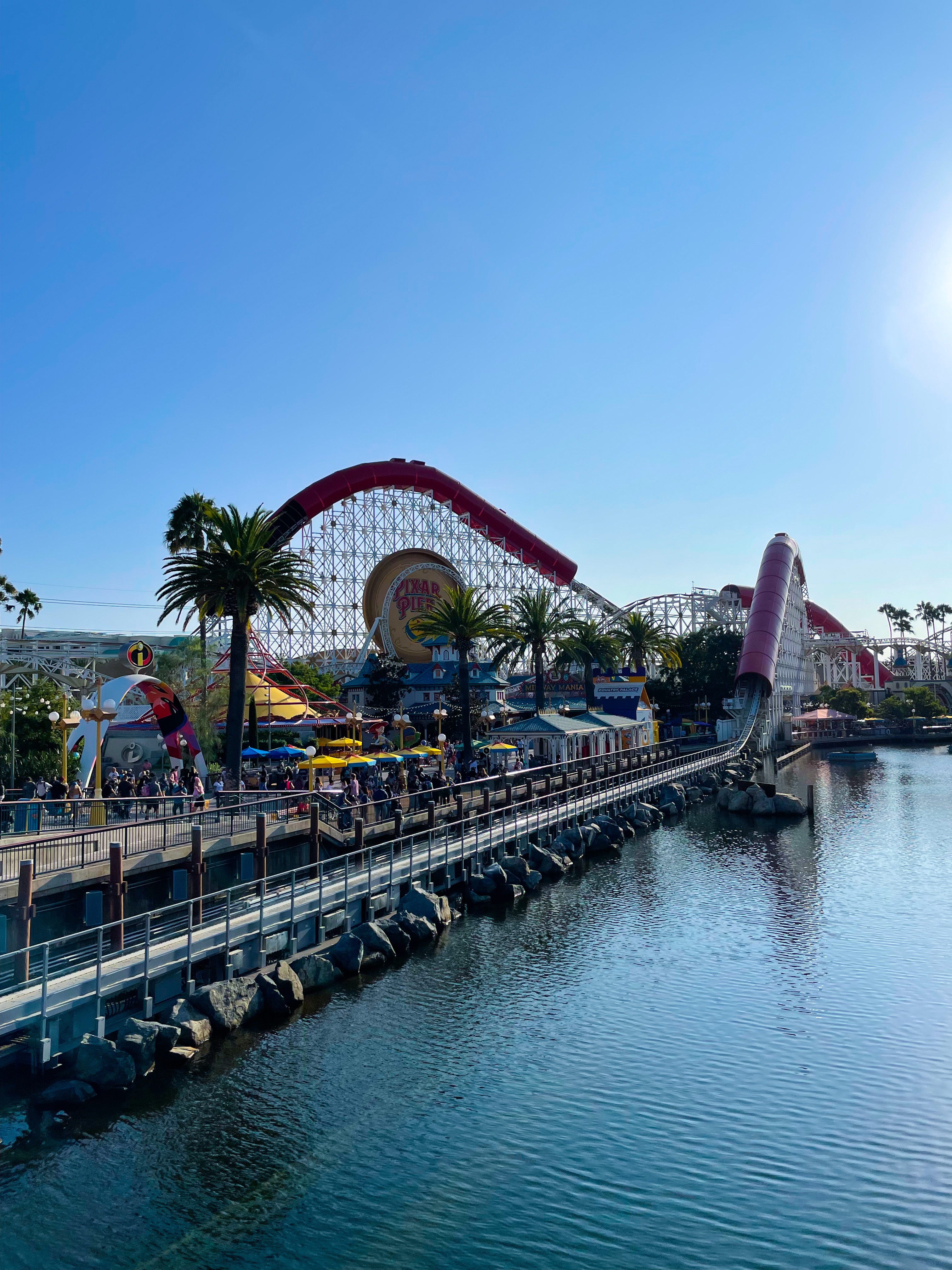 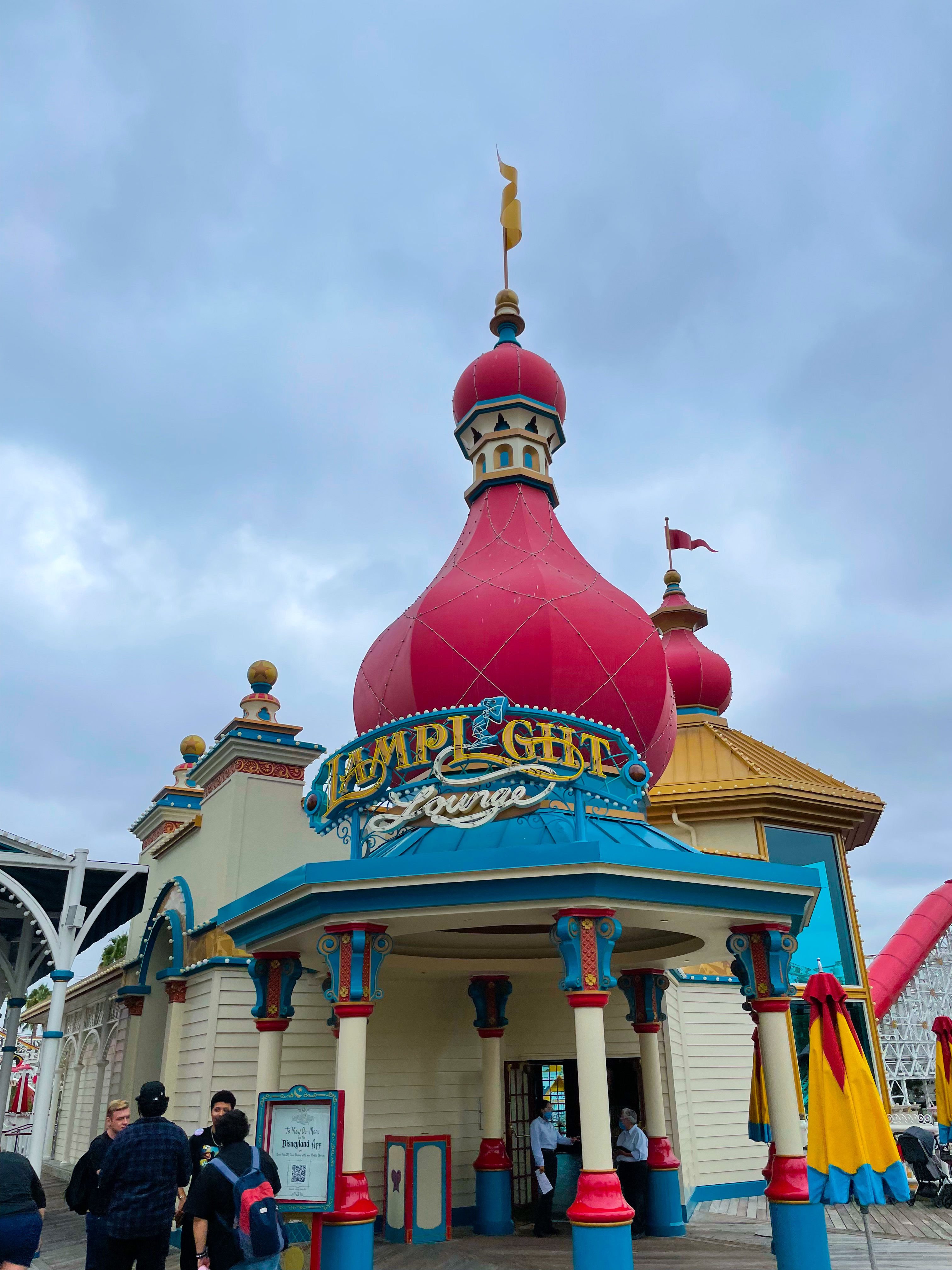 I have always heard so many great things about Lamplight Lounge, and let me tell you, it is worth the hype. Lamplight Lounge is the CUTEST restaurant and lounge with a Pixar theme, and although it was afternoon, they were still serving brunch. I had the Avocado Toast, and my husband had the Brunch Burger. Both were absolutely incredible, but we agreed that the Avocado Toast was the winner. We were so impressed that we made a mental note to come back in the evening and eat at Lamplight Lounge again.

After we ate our meal, it was our time to ride WEB Slingers in Avengers Campus. I won’t give away any spoilers or details, and I know WEB Slingers gets a bad rap from some people, but I really liked it! I thought the technology was so cool, but my arms were definitely sore afterward.

Around this time, we were both exhausted from the busy morning we had, so we conveniently walked back to our hotel room and took an afternoon nap. After we got up from our nap, we grabbed some more coffee, went right back to the park and straight to Lamplight Lounge. We got on the waiting list to sit outside by the bar, and when our spot was ready, we enjoyed a drink and the most delicious Lobster Nachos (so good) while the sun set. 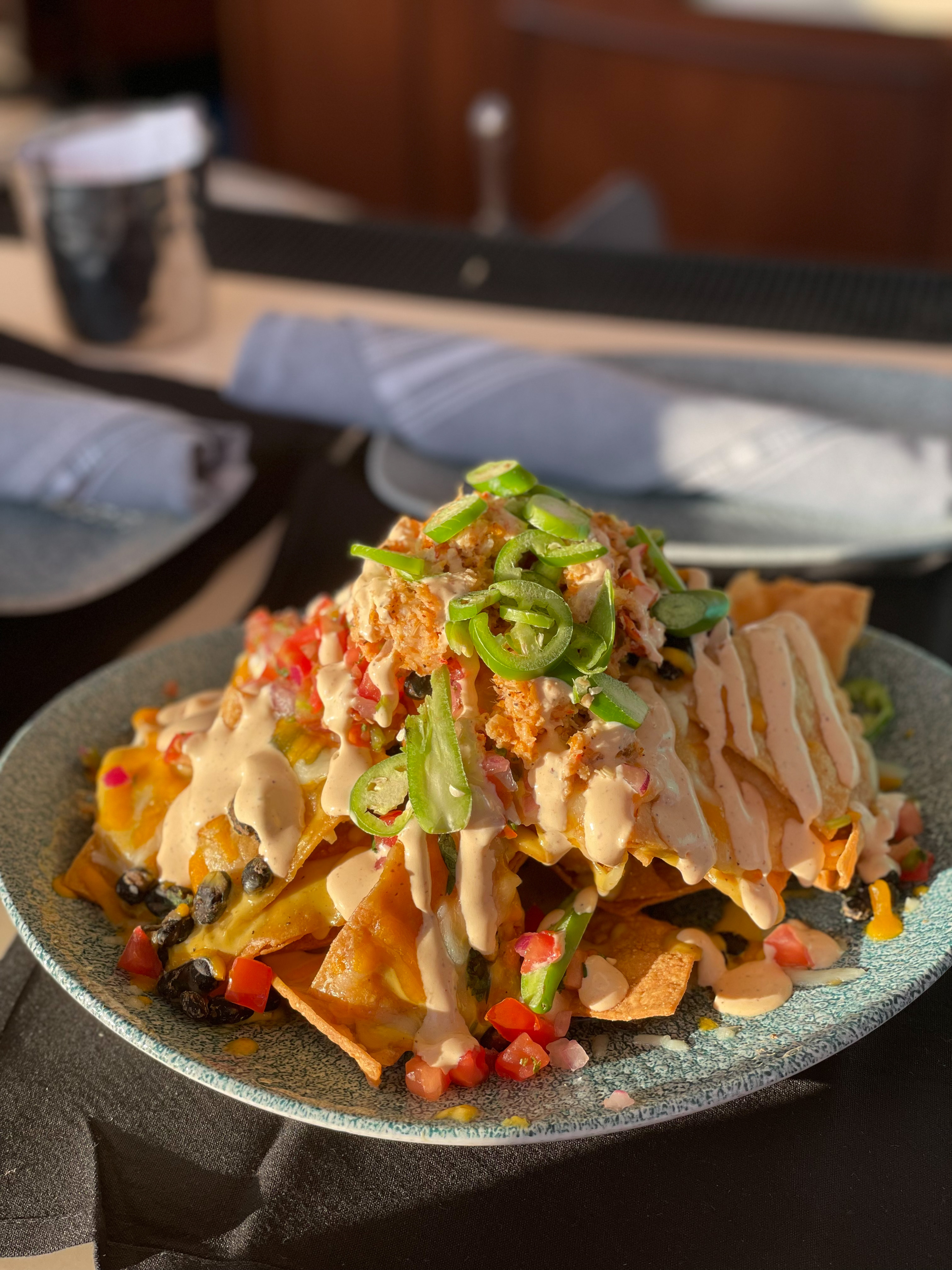 When we were done at Lamplight, I came up with a ridiculous rule that I wanted to try to ride EVERY ride at California Adventure, except for Grizzly River Run (because I didn’t want to get wet). And so, we did. We rode every single ride at Disney California Adventure. There were so many we hadn’t tried before and so many we decided we would never do again (the swinging cars on the Pixar Pal-A-Round, no thanks). It was so much fun to ride and do things we had never done before, my husband and I felt like kids. 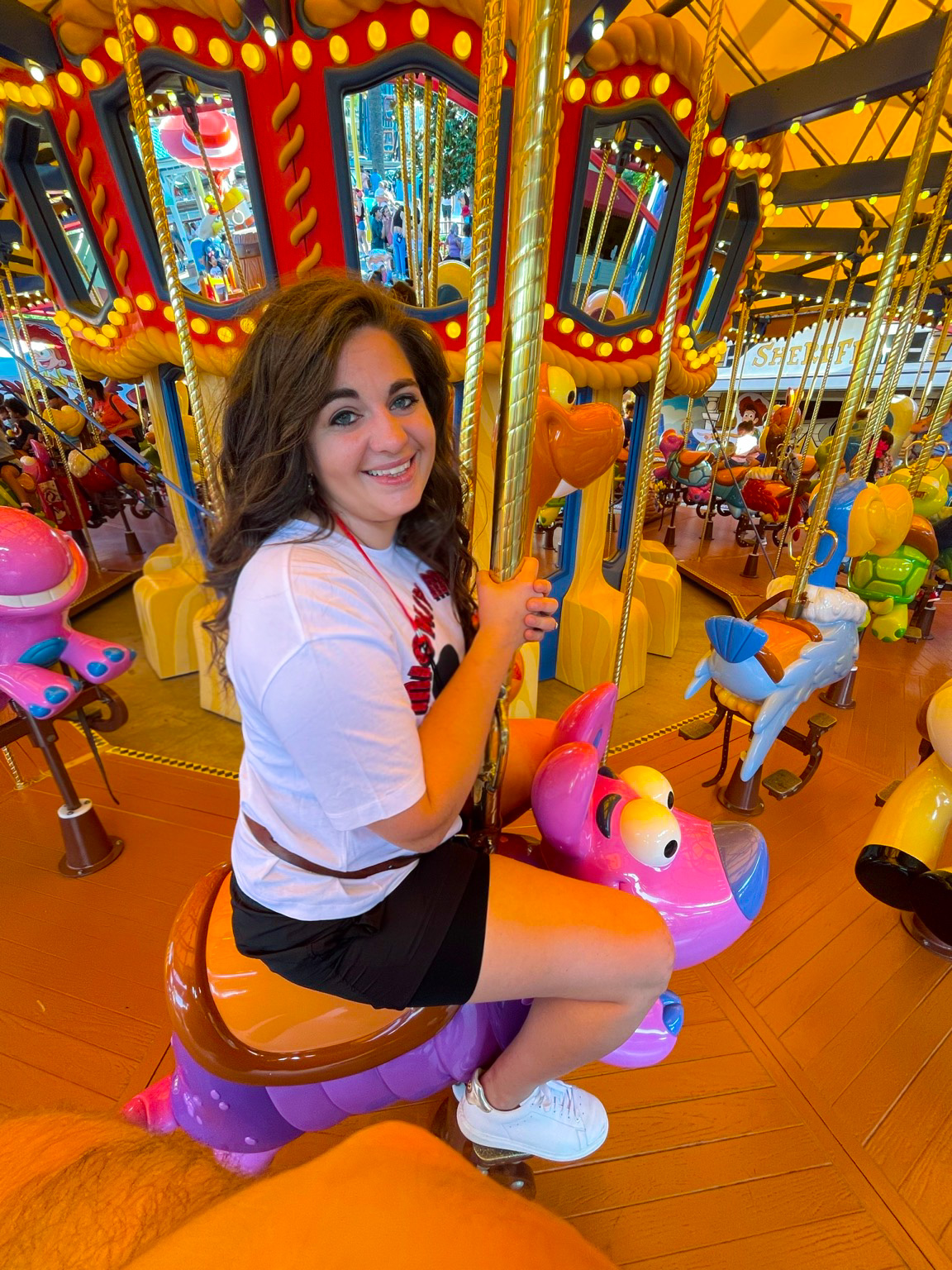 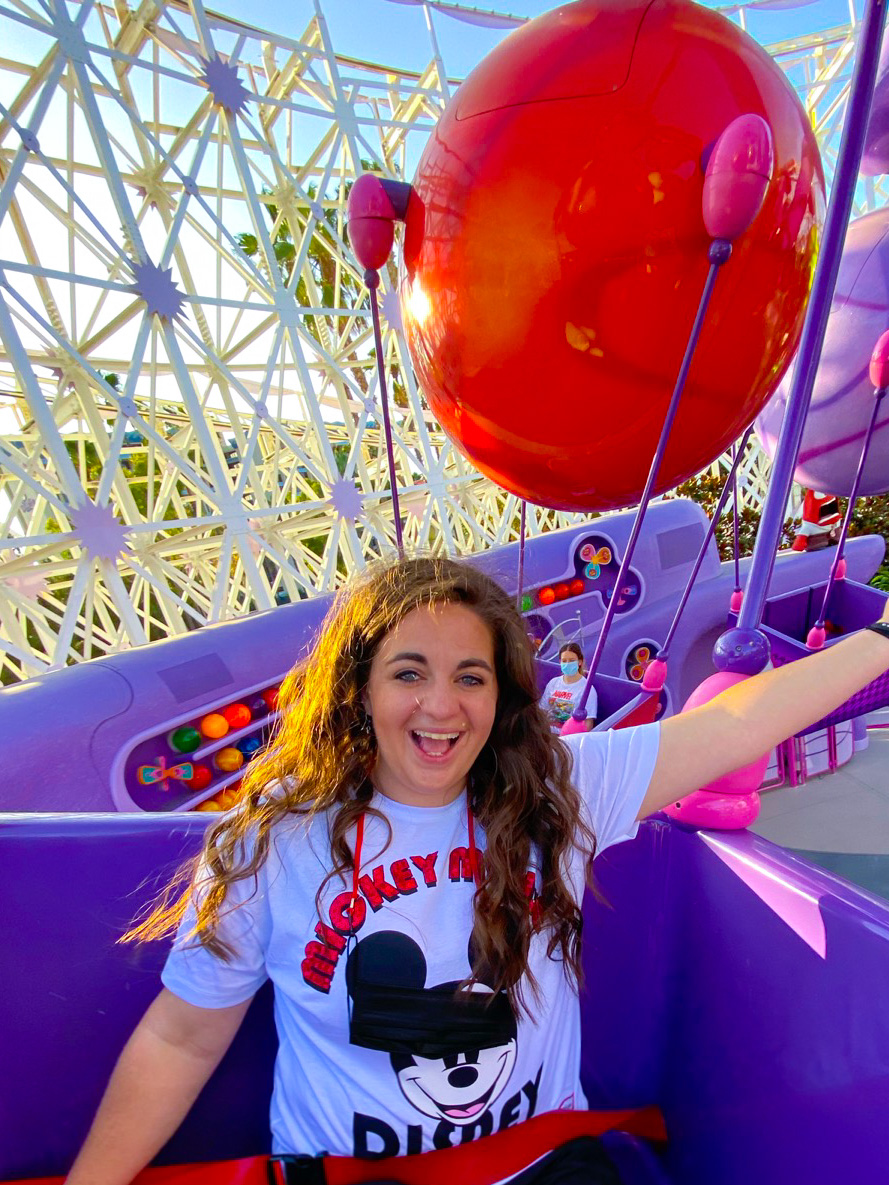 We ended our night with one last walk through Cars Land, which is so beautiful at night. Then, we headed back to Grand Californian to get some rest for our early morning at Disneyland. 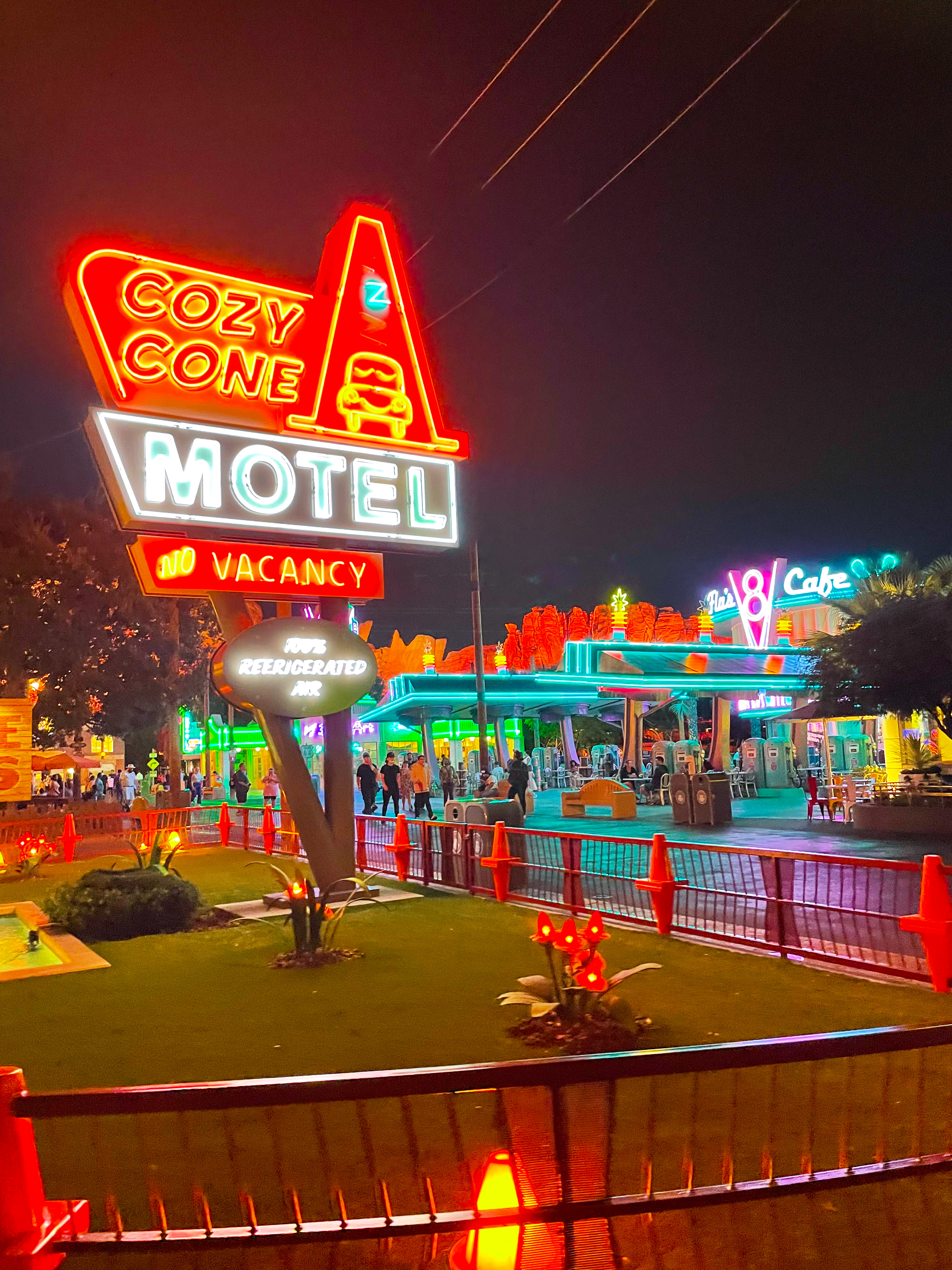 I will share the rest of our trip tomorrow! Sending love and magic.